Food Fight Studios today announced the release of their new NFT fantasy novel, Battle Bunnies: Series 1. The novel is a major achievement for the Emmy Award-winning Food Fight Studios team, creators Frank and Christa La Natra, and the NFT space as a whole.

The Battle Bunnies franchise continues to provide the most evergreen value to its NFT holders: community-created entertainment.

Almost every character in the novel is based on a real NFT holder in The Battle Bunnies community. Moreover, those same Battle Bunnies holders get a say in how the story unfolds, with everything from plot points, map features, and character names.

“We want to flip the model for creators upside-down,” says Jon Briggs, owner of Food Fight Studios. “Creators used to seek out executives for validation. Then, after years of development, the creator’s story might reach consumers. We’re doing it the other way around. We’re creating first and going straight to our community.”

The Battle Bunnies sold out its Genesis collection in March 2022, and is minting another round of NFTs in early July 2022.

The team behind The Battle Bunnies prides itself on being different from other NFT projects. Just 3 months after their first round of NFTs sold out, the team has already: 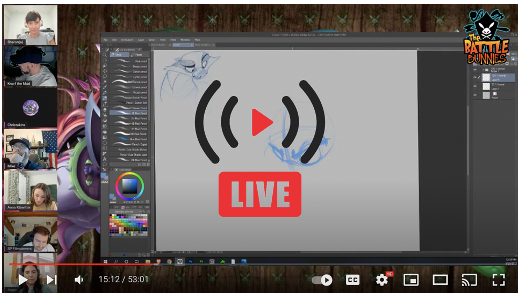 Frank La Natra, who got his start as an award-winning tattoo artist, credits the tight-knit Battle Bunnies community for creating content like Volume 1 of their novel series so quickly.

But there are no free rides with the Battle Bunnies. Whereas most NFT projects inflate their community numbers by allowing bots and dummy accounts, the Battle Bunnies team regularly removes inactive users from their Discord community.

“I spend all day with our holders online,” says Frank La Natra. “We play games, we chat, we create things. It’s all a collaboration. I draw a few pictures and tell some stories, but at the end of the day, we’re all just conduits for something our community is making of its own volition.”

The La Natras and Briggs see the community-created novel as just the beginning of a massive franchise. They envision more Battle Bunnies books, a feature-length cartoon, toys, and even an amusement park. And they see it happening sooner rather than later.

“Most projects in the NFT space overpromise and underdeliver,” says Food Fight Studios owner Jon Briggs. “We deliver world-class content like The Battle Bunnies: Series 1 because when you bring talented, dedicated people together, there’s no telling what magic might happen.”

About The Battle Bunnies and Food Fight Studios

The Battle Bunnies was created by a husband-and-wife team of professional artists Christa and Frank La Natra, in partnership with Food Fight Studios, a team of award-winning creators and producers. The project came to life as an NFT series in late 2021, with multiple releases planned over the upcoming two years.

Food Fight Studios is an animation and creative studio specializing in unconventional content production. Started in 2016 by animation industry outsiders, the team now has multiple awards and recognitions, including two Emmy® Nominations and one Emmy® Award win. From short-form content to documentaries, music videos, concerts, series development, and more of their work has been seen on an abundance of media platforms including Spotify, BET, Prime Video, MTV, iHeartRadio, and The Apollo Theater.

In partnership with Food Fight Studios, the team is committed to bringing The Battle Bunnies universe beyond art into an unparalleled fully-realized narrative with the build-out of animation and virtual reality (VR) experiences.