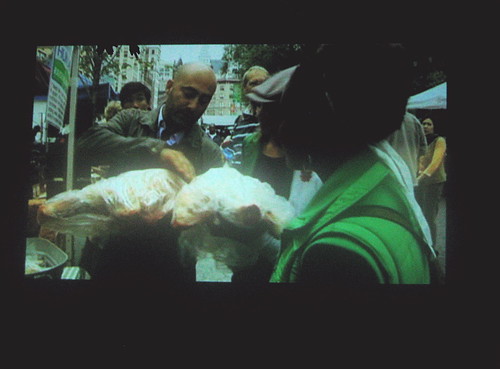 Last night we attended a lovely dinner at Ici, where Laurent Saillard served the very delicious pork shoulder he requested for his last meal. We did not, however, drink four bottles of wine each. Instead, the booze of choice was Red Hook’s own Sixpoint Ale‘s Sweet Action (“part hefe-weizen, part pilsner, part pale ale”).

The occasion was a screening of The Endless Feast, a PBS show which devotes each episode to a different sustainable food system. Of course, this episode, which features Saillard buying pork from Flying Pig’s Farm and greens from Added Value, was all about Brooklyn. The show is co-hosted by Anna Lappé, the author of Grub: Ideas for an Urban, Organic Kitchen, who agreed to host on the condition that one of the feasts featured took place in an urban center.

Perhaps it was the several glasses of beer we had had, or maybe we were high on pork fat, but EfV was practically in tears watching the show. Saillard puts on a big feast at Added Value for the teenagers who work on the farm. The kids brag about having grown the tomatoes and talk about how you can’t go back to fast food when you’ve realized how good the real thing is.

Lucky for you, this episode will air in New York on June 24 on channel 13.

If you don’t know about Added Value, check out their website and learn about the Red Hook Farm that employs teenagers and pays them for their work. Founder Ian Marvy is our hero.