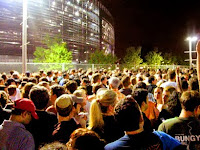 Chances are there are still U2 fans out in Jersey right now foraging for food and shelter. They’re probably half-mad, their clothes tattered, the flesh of fellow concert-goers stuck in their rotting teeth from being left no choice but to eat them to survive.

Such was the post-apocalyptic chaos following last night’s big U2 show at Giants Stadium. NBC reports that it took fans hours to crowd into NJ Transit trains that would take them along the new line from the Meadowlands back to Penn Station. Transit officials say that nothing technically went wrong — it was just a case of 780-bazillion people all trying to get on the trains at the same time.

Pissed off fans say differently. “It was crazy,” said one woman, who asked only to be identified by her first name, Amanda — one would imagine because she spent well over a hundred dollars to see U2, then stand out in Jersey for three hours. “Once you found your way, there were barricades up to guide the thousands of people pushing and shoving their way towards the area to board the trains.”

“Not even U2 could ever get me to take NJ Transit to Giants Stadium ever again,” she went on to say.

Just a friendly reminder: U2 will be the musical guest on the season premiere of Saturday Night Live this weekend. It’s free to watch them and you can do it in your home, then walk downstairs and be somewhere with a drink in your hand in under five minutes.