Saturday, February 26, 3:30 PM:
New Yorkers from all over the world continued to gather at various locations throughout the city to protest Russia’s invasion of Ukraine. Both ends of 67th Street between Lexington and Third Avenues were closed off by police barricades as protesters lofted placards with emphatic slogans and launched anti-Russia/pro-Ukraine chants toward The Permanent Mission of the Russian Federation to the United Nations, at 136 East 67th Street.

One sign compared Putin’s 2014 takeover of Crimea to Adolf Hitler’s annexation of Austria into Germany in 1938. A year later, in 1939, Hitler used a false flag operation to justify attacking Poland, which led to World War II. Ellipsis on the protest sign completed the analogy of more violence to come if democracies in 2022 don’t fervently back Ukraine:

Another protest sign compared the 9/11 terrorist attack on New York’s Twin Towers to Russia’s unprovoked and ongoing assault on Kyiv.

Like many people around the globe, local citizens have gotten a crash course in modern weaponry. Numerous signs at the Lexington gathering proclaimed “UKRAINE NEEDS JAVELINS,” a shoulder-launched missile system. As former U.S. Marine Corps Colonel Mark Cancian told Foreign Policy Magazine last month, “[I]nfantry tends to shoot these things at everything,” adding, “You may hit it once, twice, three times, but eventually, you’re going to hit a track or hit a weak spot, or something’s going to happen, even on a tank.”

Other signs approached the conflict from an international financial angle, such as one demanding, “CUT RUSSIA OFF FROM SWIFT,” a call for sanctions to block Russia from the messaging system Society for Worldwide Interbank Financial Telecommunication (SWIFT), which handles international banking transactions. Although finance experts say this might hurt global oil companies, whose banking partners are frequent users of the system, the crowd seemed to grasp that higher energy costs are a small price for democracies to pay compared to what is happening in Ukraine. (Update: This evening, the White House, along with the European Commission, France, Germany, Italy, the United Kingdom, and Canada, announced that they would expel certain Russian banks from SWIFT. As reported by CNN, the joint statement released by the White House read, in part, “This will ensure that these banks are disconnected from the international financial system and harm their ability to operate globally.”)

One woman with a Ukrainian flag painted on her forehead held her “PUTIN! GO FUCK YOURSELF!!!” placard high. (The slogan is a variation on what 13 Ukrainian border guards on a Ukrainian island responded to a Russian warship demanding their surrender: “Russian warship, go fuck yourself.” Ukraine has reported that those defiant soldiers were all killed by the Russians. [UPDATE: The Ukrainian military has reported that the defenders of Snake Island are alive after having repelled two Russian attacks that destroyed all of the island’s infrastructure. CNN reports that the contingent surrounded after they had run out of ammunition.] ) When asked if she was Ukrainian, the woman at the protest said, “No. I am Russian.” When we inquired if she knew people back in Russia who were protesting, she replied simply, “Everyone.”

And, as if reflecting the existential nature of this unprovoked war and the terrible history it recalls, one man’s sign longed for NATO to prevent Russian air forces from attacking the besieged Ukrainians: 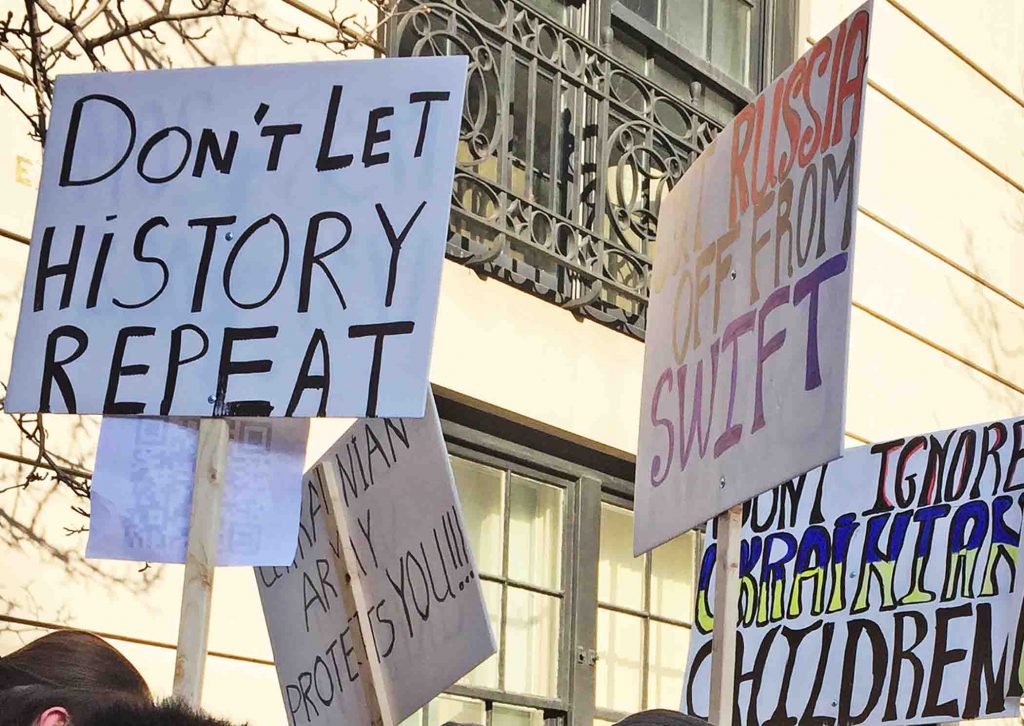