My Favorite Album: This week, Michael Lockwood of Lions & Ghosts told us about his love for a Beatles classic.

Looking back to a younger me for some HELP!

What cruel and unusual punishment to be given the task of saying (or, in this case, writing down) one’s favorite album? Ugh, there is not enough coffee on the planet to put this task in place.

Of course, due to my age, I probably have millions of choices. There are the usual suspects, the artists I have worked with, and all the new releases I listen to weekly and devour on the radio with my children while driving to school. Where to start?

I think the most logical place was where it all started for me as a listener and as a consumer of music. How did I write the soundtrack to my life?

I realize the question is, what is my favorite album? That changes every day, so to simplify my job. I want to write about the album that changed my life.

When I was about 8 or 9, life was breezy—skateboards, hide and go-seek, and hanging out with friends. Hanging out with friends also meant hanging out with my friends’ older brothers and sisters. That was the key. That’s where the spark began. My best friend’s older brother was sitting in his room listening to The Beatles, better known as The White Album. I could hear it through the wall. It was mysterious; it was pop but had this spooky edge. I pushed my head into his room only to see walls plastered with Rock ‘n’ Roll pictures. On his door was the poster I would later find out came with the aforementioned album. I was done for; it was all so exciting and different. I have never recovered from that experience. Keeping in mind, I said that was the spark… 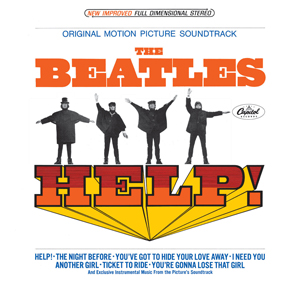 Weeks later, I saw a commercial on Channel 7 (Los Angeles) advertising “Movies at 7,” saying that The Beatles Help! was coming soon. That was a long week, to be sure, but after many school days had passed, I was riding my skateboard up and down the neighborhood sidewalks. My father had yelled down the street for me to come in for dinner. I came in, and to my surprise, he had the tv set up so we could watch Help! while eating. I was glued, I was captivated, and I am not sure I even ate that night. It was so much to take in. The music, the humor, the beautiful girls, and the James Bondness of it all. I was a mess and on a mission. The next day I was at the local record store with the OST of Help! in hand. I have played that album so many times I had to use masking tape to hold the cover together.

The mixture of George Martin’s score and the Beatles thoughtful pop arrangements drew me into that album. I am, by the way, talking about the American version, which is quite different than the UK release. That album was a journey for me. It still is. In fact, I listened to it a few weeks ago. Usually, most Sundays, I have some Beatles in my life, either listening to Breakfast with the Beatles show by Chris Carter or putting a record on.

That set the stage for me, production value, songwriting, pop culture, artistic value, art in general, poetry, fashion, and comedy. It profoundly altered the course of my life.

Perhaps I can find other albums to list as my favorite, but this is a turning point album for me, so I must pay it that respect.

Welcome to the soundtrack of my life. ♦